The sum of experience

Guest speaker Dr Svetlana Jebrak began with a quote from late, great Jewish writer, professor, activist, Nobel Laureate and Holocaust survivor Elie Wiesel: “There is divine beauty in learning … To learn means to accept the postulate that life did not begin at my birth. Others have been here before me, and I walk in their footsteps. The books I have read were composed by generations of fathers and sons, mothers and daughters, teachers and disciples. I am the sum total of their experiences, their quests. And so are you”.

Svetlana’s professional life is dedicated to research, to teaching and learning, and to understanding and sharing the Jewish experience.

In Term 1, English students in Years 11 and 13 have been studying Holocaust Literature and, when she heard Svetlana was coming to New Zealand, teacher Caroline Marsh knew she had to invite her to College. “I thought it would be an amazing opportunity for the boys to speak with her – a Jewish German whose own family was so significantly impacted by the Holocaust and a woman who has achieved so much through her study, through her work with the World Jewish Diplomatic Corps, and through her work with the Jüdisches Museum Westfalen, in particular the Jewish Stories exhibition. I knew she’d provide a unique insight for the boys and be able to give them first-hand knowledge about life for Jews in Germany and Europe post Holocaust and since the Second World War, pulling all the threads of what we’ve been studying together and creating relevant and real links to the 21st century, which the boys can then reflect on and explore.”

The story of the Jewish people is one of persecution and diaspora, but also one of resilience, courage, hope and community. According to Svetlana, in the 1950s fewer than 20,000 Jews still lived in Germany and many of them thought they would only stay there temporarily, before making a home in Israel or elsewhere. They would keep a bag packed “just in case” – and many Jews had the feeling they were a “patchwork people, living in and having to leave so many countries, but still able to survive, to live, and to keep their faith, language, culture and traditions alive.”

The Holocaust is now part of the German school curriculum, a very real and unforgettable aspect of its literature, history and geography – and Svetlana believes it is up to younger generations to keep the stories alive, to record, remember and, more than anything else, to make sure it never happens again. “It’s important to look back and ask questions about the past, but equally important to dream big, to look forward, to work to understand each other and to aim to make the world a better place.” 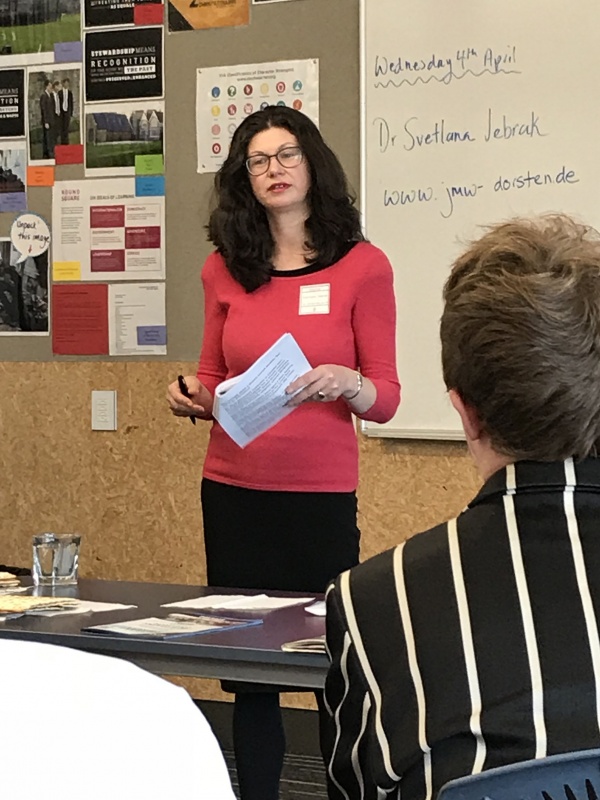