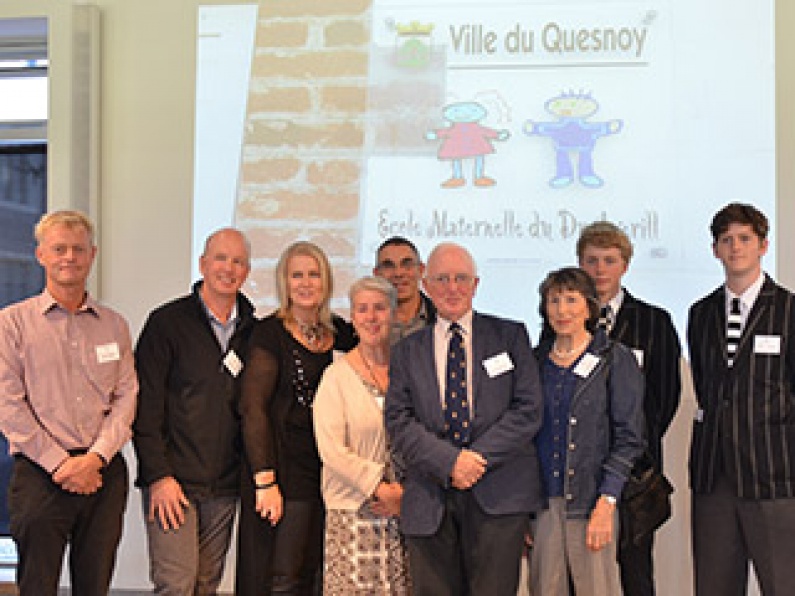 On the afternoon of 4 November 1918, during a rare lull in the battle, Lieutenant Leslie Cecil Lloyd Averill of the NZ Rifle Brigade 4th Battalion scaled a ladder set against the walls of Le Quesnoy and led a group of men up and over and into the town. The occupying Germans soon surrendered; the residents of the town, known as Quercitains, elated by their release.

The capture of the old fortress town of Le Quesnoy in northeastern France was one of the New Zealand Division’s most spectacular successes in the First World War – and the bonds of friendship forged by its liberation are still honoured today.

At a reception in the Chapman Room on Thursday 9 February Executive Principal Garth Wynne welcomed a group of 26 Quercitains to Christchurch, outlining the Christ’s College–Le Quesnoy connection and celebrating international friendships based on empathy, respect and understanding. Former Mayor of Le Quesnoy Paul Raoult replied on behalf of the French guests, stating how profound the links between Le Quesnoy and New Zealand have become over time and how much the Quercitains treasure and want to build on these relationships.

After the war, Leslie Averill – a College Old Boy – studied medicine at the University of Edinburgh, but eventually made his way back to Christchurch, where he enjoyed a long and successful career. His sons, grandsons and great grandsons – current Year 13 students Sam Averill and Jack Warren – were all College boys. Leslie Averill returned to Le Quesnoy a number of times and in 1973 was awarded a Chevalier de la Legion d’Honneur for services to France.

Severely wounded in the same battle was another young New Zealander and College Old Boy: Reginald James Richards. He also returned to Christchurch and in 1932 became College’s 12th Headmaster, a position he held until his death in 1950.

Just one week after the liberation of Le Quesnoy, on 11 November 1918, the Armistice of Compiègne ended the war.

The Quercitains have visited Akaroa and Christchurch and will also travel to Dunedin, Queenstown, Auckland and Gisborne before finishing their trip in Cambridge, Le Quesnoy’s twin city.