The annual Quadrangular (Quad) tournament between Wellington College, Wanganui Collegiate, Nelson College and Christ's College is the oldest secondary schools’ rugby competition in New Zealand. With each team playing only two games during the competition, the first matches at the Quad pit the teams who did not meet in the previous year.

Defending champions Christ’s College were up against Wanganui Collegiate and hosts Nelson College played Wellington College in the first games on Monday 03 July.

Christ’s College vs Wanganui Collegiate
Played in appalling conditions after Nelson had experienced 48 hours of torrential rain, it was not a day for expansive back play and was instead dominated by close forward play.

Loosehead prop Lachie Gunsen made an early try, followed by winger Harry Zarifeh, who scored down the blindside to give College a 10–0 lead at halftime. College continued to dominate in the second half – although Wanganui did manage to take a good try, which they then converted – and, after College was awarded a penalty, Ben Dickie scored the final points.

The second day of play, on Wednesday 5 July, saw the two winning sides from the first games play each other in the Quad final and the two defeated teams play off for 3rd and 4th place. Nelson defeated Wellington College on day one, thus setting up the final between Nelson College and Christ’s College.

Quad final – Christ’s College vs Nelson College
By Wednesday the ground had dried slightly, which allowed some broader play. College began strongly, but could not convert territory into points. Nelson, however, scored two good tries and added a penalty to take a 15–0 lead at halftime.

In the second half, a try by hooker Arthur Allen put College on the board, but despite their best efforts the team just could not break the strong Nelson defence. College were really up against it when Nelson scored a converted try and then, soon after, another try. Ultimately, Nelson were most worthy winners. The College coaches, however, were extremely proud of the character and effort shown by their players, many of whom were making their debut for the 1st XV. 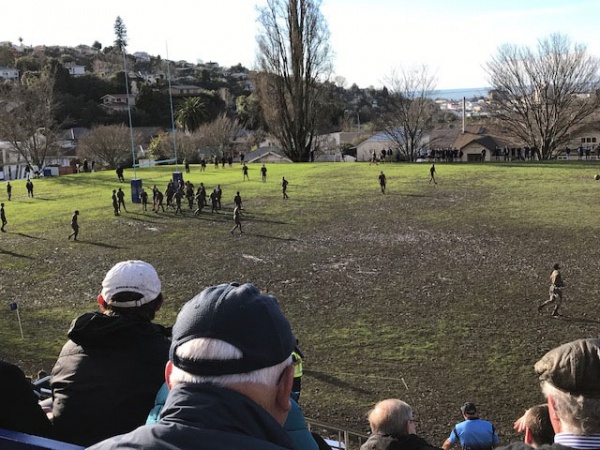