Fit and ready to row

Year 10 student Angus Wynn-Williams reports on College rowing in the build-up to the Maadi Cup regatta.

My perception going into the pre-Maadi camp was it was going to be hard. I believed the coaches would push us to our limits, due to the fact that we were building up to the New Zealand Secondary Schools Championship. I wasn’t too concerned, as I enjoy the physical nature of rowing and am happy to push myself. Though I was a little worried about having to row three times and complete four hours of study every day.

When we were on training camp over the Christmas holidays we trained three times a day, but then we got the chance to rest and recover before our next session. At pre-Maadi camp, however, this was not the case. We were required to row twice in the morning (to our limits) and then complete four hours of supervised study, revision and lessons, before returning to the lake and completing another session on the water. Initially, I thought I would struggle with this regime, but was pleasantly surprised by how well I coped and how much fun I had. I really enjoyed having access to four College staff members on call to assist me with my lessons (Mr Smith said I had to include this!). One thing that surprised me was how quickly I was able to complete my school work. This is partly because I had to stay focused for the entire study session, otherwise I could not go back out on the water.

Although we were mentally and physical tired, we made great progress improving our stroke. All my crews improved with each session and we’re very excited heading to Maadi. The camp has made a real difference to me, both physically – in improving my rowing and fitness – and mentally. I now feel better able to manage myself and stay focused on task for longer.

We started the camp on the weekend of Saturday 3–Sunday 4 March with the South Island Secondary Schools Championship. College’s U15 octuple came second. My novice eight came fourth, and the College A novice eight won gold. The “yellow boat” got second. The U16 four won their race but got disqualified, because their boat was 450gm too light. The U16 eight got first by clear water, so they were happy at the end of the day. 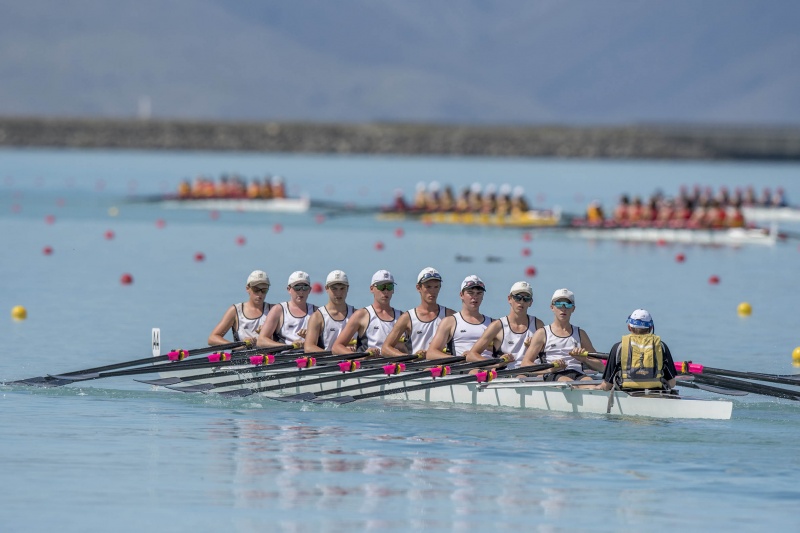 U15 octuple scull rowing up to the start at the South Island Secondary Schools Championship.

Schools Championship. Notice the poppies on their uniform, to commemorate 100 years since