Year 9 student Justin Hodges first took up the violin at the age of four; it was a good fit. When he was 12, Justin attained the ATCL (Associate Trinity College London) Diploma with Distinction, which is equivalent in standard to the first year of an undergraduate degree.

It is an exceptional feat to be awarded such an advanced qualification at such a young age, and Justin’s achievement was recognised at assembly on Tuesday 30 May.

Justin’s gift for music is underscored by hours of practice. He has two or three lessons each week and practices for at least 2–3 hours each day. But for Justin playing the violin comes as naturally as breathing: he finds it relaxing and uplifting, says it relieves stress, likes the way it engages his brain, and enjoys the challenge of mastering new music.

Justin is currently working towards the next level of letters, the LTCL, but he is taking it slowly to ensure he is well prepared, and again aiming for an endorsement with distinction.

Justin also plays the piano, which he describes as the perfect complement to the violin. He also enjoys a good game of football.

Not surprisingly, Justin’s goal is to become a professional musician. He aspires to emulate his musical heroes and dreams of further study and performance experience overseas. 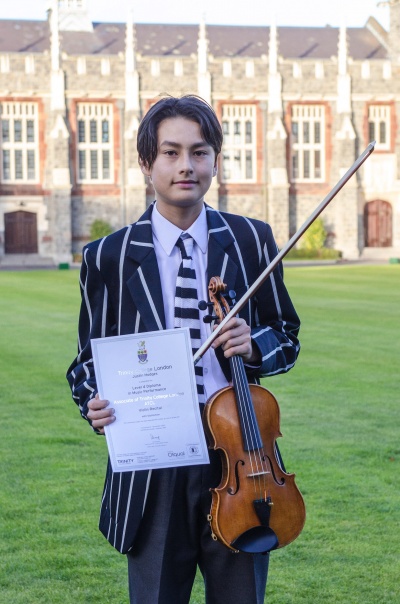