Back in 1838, a French seafarer made a provisional purchase of land on Banks Peninsula and then returned to France to find settlers willing to move across the world. By the time the French colonists arrived, however, they were confronted with a fait accompli: the British had staked their claim to New Zealand and the Treaty of Waitangi had been signed. In spite of this setback, the French stayed and the township of Akaroa – the oldest town in Canterbury and the only French settlement in New Zealand – was established.

“We’ve been looking at French colonies and French speaking countries, and learning about the French heritage of Akaroa and the early years of European settlement, so it made sense to go there and discover more about the French influences in the area,” says Year 12 student James Currie.

The boys visited the Akaroa Museum to look at the history of French settlement, then went on a treasure hunt through the township, finding aspects of French history in houses, street names, churches and cemeteries, and then did some sketching on the waterfront à la French artist Charles Meryon, who visited Akaroa in its early days and whose work is held in the collection of Canterbury Museum. They also enjoyed the opportunity to practice their conversational skills with some French tourists. Their lunch, however, had a decidedly English seaside flavour. Rather than seeking out a patisserie, they couldn’t resist the temptation of fish and chips.

Teacher Susan Harding says the aim of the trip was to give the boys an immersion day in a place which has a special significance to both New Zealand and France.

“It was a fascinating day. I was surprised by how much of a French influence there is in Akaroa, I’ve never seen it in that light before,” says James. 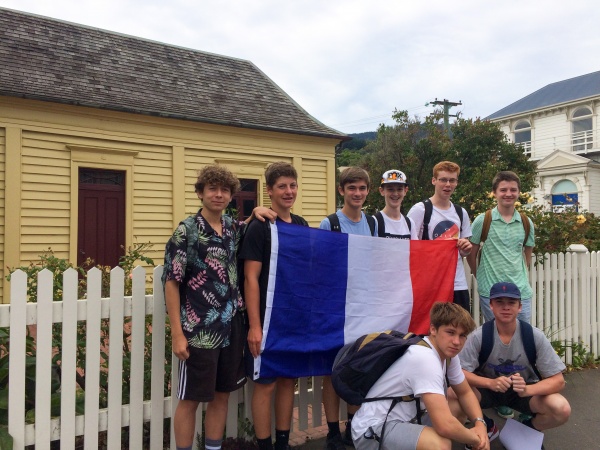