Top at the Quad

The annual Quadrangular Tournament is one of the major events in the rugby calendar for all four schools – Christ’s College, Nelson College, Wellington College and Wanganui Collegiate School – involved.

As well as the opportunity to play some first class school rugby, 1st XV captain Sam Darry says it is an honour to play in a tournament that has such a long history and good to have time to get to know the players from the other schools. “On the field we’re competitive, but after the game it’s cool to be part of it, attend the formal dinner, take in the atmosphere, grow relationships and meet lots of new people. It was a pretty awesome few days.”

Sam was confident College was in with a chance, as he says the team gels well, works hard and stays focused. “Our first game against Wellington College was probably our best game of the season so far, and in the final against Wanganui Collegiate it all came together for a good result.”

Guest speaker at the Quad Dinner on the Monday evening was Hurricanes midfield back Vince Aso. His advice on what it takes to be a professional rugby player no doubt inspiring many of the young men present to consider following a sports pathway.

The 2018 Quad Tournament was hosted by Wanganui Collegiate School from Sunday 24–Wednesday 27 June.

The first match, played in wet and windy conditions, turned out to be one of the team’s best performances so far this year. College took early control through two tries by George Coull and one by Fletcher Anderson – and although Wellington College fought back, Arthur Allen’s score after a good lineout drive put College well ahead, with a commanding lead of 26–0. Wellington scored just before the break, making it 26–7 at half-time. In the second half College continued to dominate play, with tries to Kurtis Weeks, Fletcher Anderson and Shun Miyake. Shun also kicked 6 of 7 conversions for a personal tally of 17 points in the match. At the final whistle, College had earned a well deserved win.

College first played Wanganui Collegiate School back in 1890, and this tournament final was the 100th match between the two schools. To mark the occasion, College played in a commemorative jersey featuring the crests of both schools.

Wanganui started strongly and College were forced to defend for the first 15 minutes before gaining better territory and possession. Shun Miyake put College ahead with a penalty before George Coull and Sam Darry scored tries, one of which Shun converted to take the team 15–0 ahead at half-time. College had control throughout the second half, with Harry Zarifeh picking up two tries and Shun Miyake kicking two penalties and one conversion. Wanganui scored in the middle of the second half, but by that time the game – and the tournament – belonged to College. 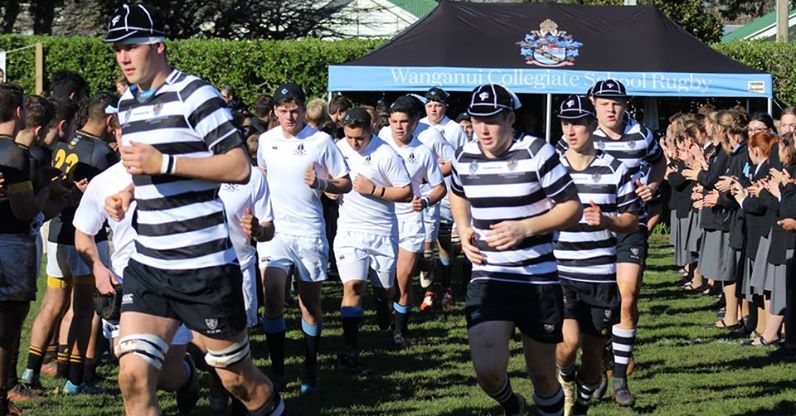