Not until the last term of his final year at Christ’s College, did Guy Heveldt identify a future career.

“I didn’t have a clue what I was going to do,” the TVNZ sports journalist told a group of boys while on a mentoring visit to College in July.

“It wasn’t until Careers Advisor Chris Sellars sat me down and asked what I liked doing – and that was basically talking and cricket – that I began to see I might be able to combine both in a job. He suggested the broadcasting degree at Christchurch Polytechnic, something I hadn’t considered, and it’s proven the best possible outcome for me.”

With a Bachelor of Broadcasting Communications, majoring in Journalism under his belt, Guy’s now a familiar figure in sporting media, covering the Glasgow Commonwealth Games in 2014 and the Cricket World Cup in the United Kingdom in 2019.

“I nearly cried on air at the result,” he recalls, “In fact, we all did afterwards.”

Tears aside, Guy has found his perfect niche.

“It really is the most amazing job. I get paid to watch sport! I love being out of the office and talking to people, and every day in my job is different. I love deadlines, and I love the pressure of getting a story out in time.”

And of course, while he’s happy to cover all sports stories, cricket is his passion.

“I love cricket, but I don’t play anymore, mainly because of the demands of the job.”

At College, he was captain of the 2nd XI and played rugby until Year 11.

While completing his degree, Guy worked for six months as a researcher for Eyeworks in Auckland and did shifts at Radio Sport.

“When I was at College I listened to Radio Sport all the time, and in bed at night. I had grown up listening to Brendan Telfer, Kent John, Darcy Waldegrave, Mark Richardson and Peter Montgomery, and at first being with them at Radio Sport was quite daunting, I was a bit blown away with where I was.”

He spent seven “amazing” years at Radio Sport, “learning how to speak confidently on air, and how to elaborate, to tell the story better, how to write better. It was a great training ground for sports broadcasting.”

He moved into the production side, hosted radio shows, and eventually joined TVNZ.

“My first day was when Team New Zealand won back the America’s Cup!”

The Harper House Old Boy says College set him up for life.

“It taught me to be a confident, well mannered, polite individual. I learnt the skills necessary to live and work in the real world, and I genuinely think that I got moulded into a man confident to do whatever I wanted to do. It was an amazing education.” 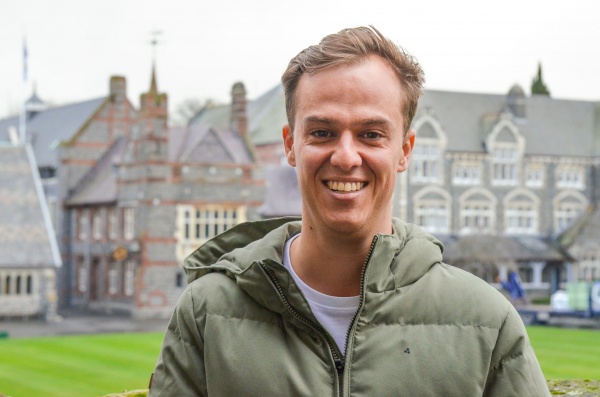