Teddy Tahu Rhodes – What College means to me

Standing on the Quad on my last day at College, I overheard [Director of Music] Bob Field-Dodgson say to my mother I could make a career out of music one day. It was just a passing comment, but it stuck with me – coming, as it did, from someone who was so important to me in my formative years. At some point, teachers become more than just teachers, they become mentors, giving over and above what’s required to see you find your strengths, nurture your talent, and develop as a person, for no benefit to them other than that they want to see you achieve the best you can with what you have. I appreciate it so much when I look back and realise what a privilege it was to have a College education. College made me want to go to university, to aspire to further education, and while I chose to study commerce because it seemed a logical path, I also carried on with music – always, in the back of my mind, I think I knew that was where I wanted to head. I think the seeds that were planted at College formed my life’s journey. It was such an intense and inspiring time. I still keep in touch with friends from College and I’m always amazed at what College alumni achieve. 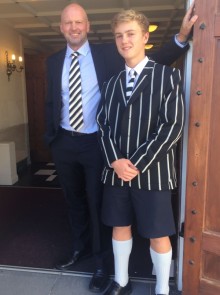 Teddy Tahu Rhodes is one of New Zealand's most prominent operatic performers with a significant international career.

His time in the Chapel Choir while at College led him into the National Youth Choir in his final year. He went on to win the Dame Sister Mary Leo Scholarship while at university, without thinking that singing would be his eventual career. After obtaining his degree in accounting, Teddy won the Mobil Song Quest (now known as the Lexus Song Quest). He then studied for a year at the Guildhall School of Music & Drama in London.

He returned to accounting in New Zealand, but a chance invitation to perform in Australia changed everything. It has led Teddy to worldwide appearances in many of the world’s leading Opera Houses, as well as recording contracts, and  worldwide recognition as the recipient of several prestigious major awards.