Old Boy Colin Averill’s contribution to the life of the school was recognised at assembly on Thursday 17 April when he was awarded a Senior Honours Tie.

The second of three successive generations in his family to attend College, Colin described the award as “a huge honour, very unexpected, and very much appreciated.”

Colin started College in 1949, boarding in School House. At that time, the country was slowly recovering from the Second World War and College was a very different kind of institution to the school of today. Colin is the first to admit he did not enjoy College at first and it took a while to settle down. But he persevered – hoping his father’s advice to “hang in there, be yourself, set your own goals, earn respect by what you do, and friendship should follow” would work – and by the time he left Colin had much to treasure from his College experience.

“I certainly got a lot from my time here. I learned to cope, to fend for myself, to get to where I needed in terms of academic achievement, to enjoy sport and to form some lifelong friendships. But, above all, I learned to get involved … I was never a star, but had the self-motivation to get involved, to participate and to make the most of what was offered. These were perhaps the most important things I learned.”

These attributes served him well in his career as a lawyer with law firm Lane Neave, in his involvement in community work with various charities, including Nurse Maude, and in his contribution to the CCOBA and as a College tour guide. Now Colin has put his considerable energy behind the push to raise funds for the New Zealand Memorial Museum in Le Quesnoy in France. While it is a project to commemorate all New Zealanders who served in Europe in the two world wars, for Colin it is personal. His father, Old Boy Leslie Averill, was first up the ladder, leading the assault by New Zealand troops to liberate Le Quesnoy in 1918.

Colin has been a quiet leader and respected colleague, mentor and friend throughout his life, and he urged the boys at assembly to make the most of their fleeting time at College. “I hope and believe that motivation starts right here, as you learn to cope, to participate and to influence others by your example. The resources and opportunities available to all who pass through this school are huge, and College and its Old Boys continue to punch above their weight in their contribution to our country and beyond.” 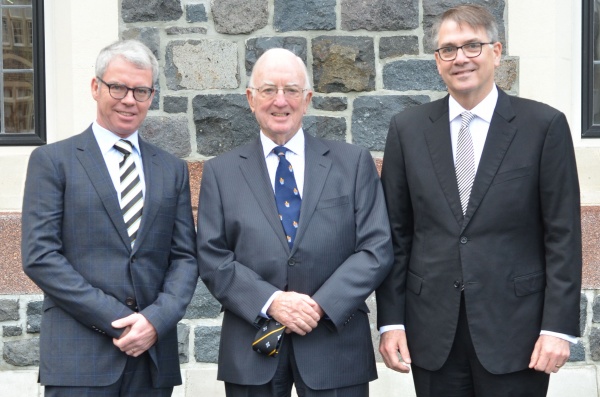