It is an amazing world out there – and going on an exchange opens up many opportunities to benefit from the experience of time spent living and learning, immersed in another culture. In recent months College students have gone to Japan and France, and College is currently hosting students from Japan and Hungary.

Over the summer holidays Year 13 students Caelan Murch and Jack Tracy spent several weeks living in Japan, going to school at Konan Boys’ High School in Kobe. Both say it was an extraordinary time, with life in Japan very different from New Zealand. “Japan is so crowded and busy and has such a fast pace of life. Everything happens at speed … it’s kind of crazy, kind of awesome,” says Caelan.

Nevertheless, they jumped right in, embraced the experience, and took every opportunity to explore their surroundings. Kobe, Osaka, Kyoto and Nara are discrete cities that together form one huge metropolitan area.

Caelan and Jack were both hosted by Ryo Toyoshima in Kobe, and Jack also spent a couple of weeks with Kippei Minami in Osaka. Now they are returning the favour, and Ryo and Kippei are at College until the end of term. They have already spent time at Jack’s family home and are now based with Caelan, boarding in Richards House.

Ryo and Kippei are enjoying the more relaxed lifestyle here, the space, and easy access to parks and gardens. Ryo plays in the Big Band and enjoys sailing, Kippei likes a game of golf, and they are both looking forward to taking part in some of the boarders’ activities. Their main goal while in New Zealand is to improve their English language skills. 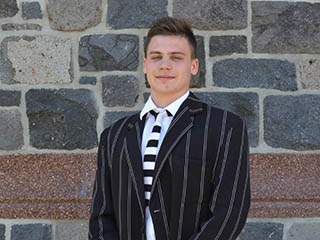 Year 13 student Balint Tomozi was invited to come to New Zealand by the Head Coach at Canterbury Water Polo, Zoltan Boros, and College is already reaping the benefit of his prowess in the pool. As Hungary is a land-locked country, Balint loves living near the sea and, when not in the pool, enjoys ocean swimming. He finds College different, but in a good way. Back in his home city of Eger, students wear mufti to the co-ed secondary school and there is no concept of BYOD, just good old-fashioned books. Balint is staying with Max and Louis Clark, and is looking forward to making the most of his time in Christchurch. He will be here for six months.

It was destination Valbonne in Provence, France, when Year 12 students Jack Caunter, Blake McGuigan and George Murray jetted off for a six-week exchange in December 2016. Billeted with French families, the boys attended school at the Centre International de Valbonne, as well as visiting many of the region’s attractions, including a perfume factory in Grasse, the Musée Picasso at Antibes, the Oceanographic Museum and Old Town of Monaco, and Thales Alenia Space – an aerospace manufacturer and satellite launching facility – in Cannes.

While they had a fantastic time on many different trips, they also enjoyed simply spending time with their host families, embracing the French way of life and practising their language skills. “We all had different experiences with our host families, but everyone was friendly and welcoming. We got on really well,” says George.

At school, they attended a mix of special language lessons and regular classes. School hours vary from day to day and focus solely on academic subjects. Sport, music and other co-curricular activities are independently organised. With around 3,000 students, the Centre International de Valbonne is like a small city within itself.

Jack, Blake and George all agree their French exchange was “unforgettable”.

“New Zealand is quite an isolated country and the trip gave us a much more international perspective,” says George.

“I’ve a much better understanding of French language and culture. Having been there, French feels a whole lot easier now,” says Blake.

“It was an amazing experience … learning the language, embracing the culture, living the life, just being there and hanging out with friends. I loved it. I know I’ll go back one day,” says Jack.