Bailey’s first car is an Audi

It was a big day for Bailey Libeau – he left on the first leg of a trip to London, and he won an Audi.

Bailey, Year 13 in Harper House, was on his way to the airport when the “My First Car” Raffle was drawn at College by Andrew Densem, an Old Boy and staff member at Archibald’s which donated the car.

Initiated by parents of the cricket committee with the dual purpose of raising funds for a new training block and equipment and of promoting teen driver safety, the raffle raised $40,000.

Janine Morrell Gunn and Devonie Eglinton led the lottery organisation and both were delighted with the funds raised and the support of Archibalds, the College’s lead sponsor which not only supports cricket, but also drama and rugby.

Andrew Densem said Archibalds were encouraged by the work College was doing in driver safety, and Executive Principal Garth Wynne commented that the hard work of the organisers and the cricket community and the generosity of Archibalds  would result in a facility that would have “generational impact” for many years into the future. 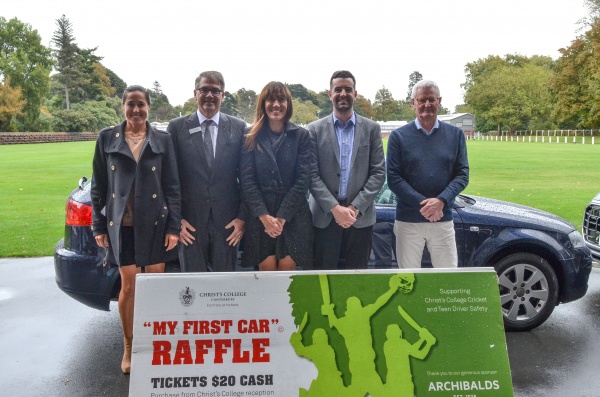